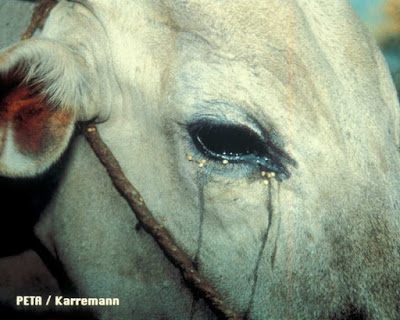 Hindus and Muslims are at loggerheads with each other again. For Hindus cow is sacred but for Muslims not. So some sections of Muslims want the right to kill and eat her flesh but Hindus want that the cows should not be slaughtered. Left liberal intellectuals known for loathing Hindu tradition and culture are gleefully advocating the killing of holy cows.

Amidst all this cacophony the sufferer is the poor cow.  Cow eats raw grass provided abundantly by nature and converts it into milk. Now there would not be any individual who would deny the fact that they have been nourished by cow’s milk and milk products.

Cow is serving us selflessly just like our noble mother who throughout her life serves us without any expectations.  And so the Vedic literature asks us to treat cow as our mother and asks us to protect cows and care for her just like a child is expected to take care of her mother.

In Bhagavad-gita (18.44), cow protection is recommended (kṛṣi-go-rakṣya-vaṇijyaṁ vaisya-karma svabhava jam). Krishna is even called Gopal and Govinda. Gopal means one who takes care of cows and Govinda means one who gives pleasure to the cows.

Now why the Vedas give emphasis to serve the cows and not other animals. To understand this let us understand the purpose of the holy books. Be it Vedas, Koran or Bible all these sacred books underlines the process by which we humans can gradually elevate our consciousness. And so Vedas assert that as humans we should try to have a sense of gratitude towards those who serves us and care for us.

Since mother cow serves us by giving milk so we should take care of her. Ideally we should have loving attitude towards all the children of God including animals and plants but at least we have to begin somewhere and slowly reach the stage where our heart is filled with love and compassion for all. So we should strive hard to cleanse our heart of all ungodly qualities.

A person’s greatness is not measured by how cruel he is. If this would have been the criteria then likes of Hitler and Aurangzeb would have been eulogized today. It is the character of compassions which makes a person really human.  And all the religions of the world be it Hinduism, Islam or Christianity speak the language of peace, brotherhood and most importantly tolerance. Because there can be no peace without tolerance.

Killing cows is not mandatory for Muslim as per their religion. In fact there is no glory in killing cows and eating her flesh. Many noble Muslim brothers have given up this business.  But if some Muslims want to get out of this business but because of poverty is not able to do so then the Hindus should financially help them to get out of such business.

Also, the emotionally surcharged statements like “I love eating beef”  or  “Muslims will be punished for eating beef”  made by crazy sections of both the communities should be avoided.   We should create a violence free society where there is no bloodshed, where Hindus & Muslims live together peacefully without hurting and humiliating each other and without killing or maiming each other.

Whom do you love more – Krishna or your husband?

How to control the urges of speech, mind, anger, tongue, belly, & genitals?