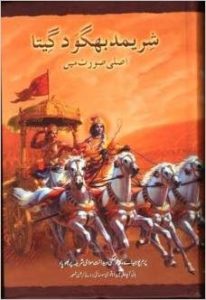 Jammu & Kashmir government under pressure from the secular media and academicians decided to withdraw the notification which asked the educational institute to buy urdu version of Bhagavad Gita and Koshur Ramayana for their libraries.

The Education department had issued the directive on 22nd October to purchase these books for the libraries.

Greater Kashmir reports, “The decision, according to the circular, had been taken in a meeting  chaired by advisor to Governor B B Vyas on October 4. “The school education department will consider purchasing sufficient number of copies each of Urdu version of Shrimad Bhagavad Gita and Koshur Ramayan authored by Shri Sarwanand Premi for making these available in schools,” read an official communiqué dated 22.10.2018 sent by under-secretary school education department to directors, school education Kashmir/ Jammu.”

But as expected it drew the ire of the secular intellectuals. Omar Abdullah, former chief minister of J&K, immediately tweeted, “Why just the Gita and Ramayana? If religious texts are to be placed in schools, colleges and government libraries (and I’m not convinced that they need/should be) then why is it being done selectively? Why are other religions being ignored?”

It has to be noted that the books were just supposed to be made available in the libraries and it was not to be taught as part of any academic curriculum. But still as expected the secular intellectuals were aghast at the decision.

If the books would have been made available in the libraries the students would have got a chance to know more about the vastness of Indian culture and tradition. It would have helped them to develop a broader outlook.

Bhagavad Gita and Ramayana are not meant for Hindus but it is part of Indian culture and tradition and every Indian be it from J&K should have no qualms in accepting it. Their ancestors were Hindus too before they embraced Islam.

In fact Kashmir  got its name from sage Kashyapa who is one of the most revered sages of Vedic India.