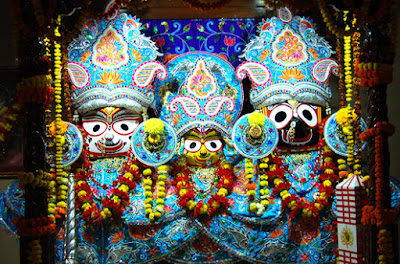 Lord Krishna was residing in Dwarka with his 16,108 wives. For all his 16,108 wives there were separate palaces and Krishna had expanded himself into 16,108 forms and he used to be simultaneously present with all his wives. This can be possible only with Krishna and not with lesser mortals like us, so we should never try to imitate the esoteric pastimes of Krishna. All the queens of Dwarka were extremely happy and tried their best to please the Lord. But the queens often found that Krishna remained absorbed in the pastimes of Vrindavan. This intrigued the queen. They used to think, “What so great and special happened in Vrindavan that Krishna remains completed absorbed in his childhood pastimes?” A desire arose in their hearts to know about Krishna’s childhood days in Vrindavan.

The queens approached Mother Rohini, who had witnessed the Vrindavan pastimes of the Lord. Mother Rohini agreed but warned that Krishna and Balaram should not hear about this pastime otherwise they will completely get captivated with emotions. So it was decided that Subhadra, Krishna and Balaram’s sister, would stand at the door and will immediately inform Rohini and the queens if Krishna and Balaram comes there. Mother Rohini started narrating the pastimes while Subhadra guarded the door. The pastimes were so wonderful that Mother Rohini, all the queens and Subhadra were enraptured. Meanwhile Krishna and Balarama understood that there is something special going on in the palace and so they immediately rushed to the hall where all had gathered. Subhadra who was completely engrossed in hearing the pastimes did not notice the presence of Krishna and Balaram. The pastimes were so sweet and nectarean that Krishna, Balarama and   Subhadra started developing Maha – Bhava. Their eyes dilated and became big, face widened, legs and hand shrunk in their bodies – these features were unique and never ever seen before. During the same time Narada Muni arrived at the scene and he saw that form which was unprecedented. Upon seeing Narada Muni, all the three came to their normal self. But Narada Muni pleaded the Lord that he should let others also witness these extremely unique and rare forms. Lord Krishna agreed and said that they will appear as Lord Jagannath, Lord Baladeva and Subhadra in Jagannath Puri in these forms for the pleasure of the devotees.

This is why Lord Jagannath, Lord Baladeva and Subhadra Devi have such a unique and beautiful form in Jagannath Puri.