How can Hanuman be bound by chains? Who can dare to do so? And how can the Supreme Lord allow his Supreme devotee to be tied by chains?

These are some of the natural thoughts which any devotee of the Lord will have. But spiritual life and spiritual world is filled with many interesting incidents which gives us immense joy.

There is indeed one such pastime when Hanuman the famous devotee of Lord Rama was asked by Lord Jagannath to be bound by chains.

Jagannath Puri dham is located on the shore of Bay of Bengal. And in the city we have the world famous temple of Lord Jagannath, the Lord of the entire universe.

It is said that as the temple is near the sea so the water of the sea used to enter the city and upto the temple bringing discomfort to the devotees. Once Varuna wanted to take darshan of the Lord so he went to the temple and as a result the city got flooded.

The residents wanted there should be someone who could prevent the water from the sea entering the temple town. Now who could do this herculean task. It is but natural that Lord Jagannath turned towards Hanuman who during the time of Lord Rama had easily crossed the ocean to find mother Sita.

Hanuman happily agreed. And everyone felt relieved and were happy.

But as the days passed Hanuman started becoming unhappy.

Because of the food which was given to him. It is said that during that time Lord Jagannath was only offered Khichdi (dish made from rice and lentils) as bhoga. And same was given to Hanuman also. He got fed up. He had the experience of enjoying delicious food in Ayodhya.

So one day he could not control himself and thought that let me go for sometime to Ayodhya and eat varieties of food as much as possible and then I will quickly return back to Puri.

So he went in the night to Ayodhya to savour the delicacies. But during his absence the sea entered the city. Everyone was wondering how it happened?

Soon they realized that Hanuman was not in town for brief time and had taken leave without approval.

Lord Jagannath ordered that Hanuman be tied by chains. Hanuman accepted his mistake and happily agreed to be tied. It is said that on every chain links name of Lord Rama is engraved.

This is why here Hanuman is also called Vedi Hanuman or Bedi Hanuman i.e. Hanuman bound by chains. He is also known as is Daria Mahavir.

What about the Prasadam?

While pleading his case Hanuman told to Lord Jagannath about the reason why he had to flee in the night to Ayodhya. Lord Jagannath understood the problem and it is said that from that day onwards it was decided that Lord Jagannath will be offered different varieties of food and Hanuman would also get the different delicacies. Hanuman was now pleased and he decided to remain there only.

From that day onwards the tidal waves have never entered the city, never disturbed the residents. 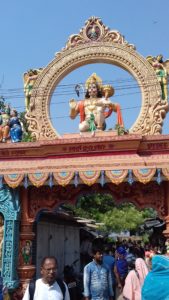 What is the reason behind Hathi Besha of Lord Jagannath?

Who installed the first deity of Lord Jagannath in Puri?