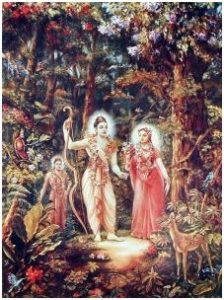 After vanquishing the demon Ravana, establishing Vibhishana the king of Lanka and most importantly rescuing mother Sita, Lord Rama who was about to complete his 14 years of exile decided to return to Ayodhya.

As soon as the news spread in Ayodhya that Lord Rama will be returning there was jubilation. The citizens of Ayodhya had tears of joy in their eyes, desperately wanting to see the Lord they were cursing the time which they thought was delaying the arrival of their beloved Rama, their lips were singing the glories of Lord Rama. Leaving everything aside everyone immediately departed to Nandigram.

It was a festive atmosphere.  Bharat was surrounded by his ministers, priests and thousands of citizens. Learned Brahmanas were reciting Vedic mantras, experts musicians were playing musical instruments.

There were several chariots made of gold and were driven by horses decorated with many ornaments. The chariots had many colorful flags of different shapes and sizes..

There were soldiers wearing golden armour, beautiful ladies and many dancers. Many servants were carrying different paraphernalia like umbrella, whisks and many other important items.

As soon as Lord Rama descended from the Pushpak Viman Bharat ran to embrace the Lord. Carrying the sandals of Lord Rama in his own hands, he placed it in front of the lotus feet of Lord Rama and pleaded him to become the king of Ayodhya for the pleasure of the everyone.

Seeing their beloved Lord, everyone was dancing and singing in joy. When Lord Rama accompanied by all his beloved family members were riding through the streets of Ayodhysa the citizens were singing and dancing in joy.  Everywhere there was festive atmosphere. People were showering colourful and fragrant flowers on the way. People had lit their homes with ghee lamp to welcome the Lord.

Lord Rama accepted the throne of Ayodhya and as a king he ruled like a father taking care of his own children. Lord Rama’s rule was so unique and so virtuous that still today everyone wants Rama Rajya.

Let us see  the 11 unique features of Rama Rajya as described in Valmiki Ramayana.

On this auspicious day of Diwali let us enthrone Lord Rama in our hearts, let us spread his glories and create a society where everyone follows the teachings of Lord Rama.

Should a devotee give up his duty?

Don’t lose heart but give your heart to Krishna