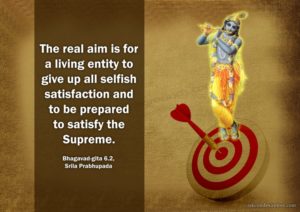 Bhagavad Gita, one of the most celebrated literary masterpiece, contains pearls of wisdom which has served as a beacon light for humanity since ages.

In Bhagavad Gita there is a conversation primarily between Krishna, the Supreme Lord, and Arjuna who represents the living entities and who is struggling in the midst of a battlefield with his emotions.

Krishna in Bhagavad Gita teaches us that even a personality like Arjuna who was the greatest warrior of his time too became helpless when he was just about to  fight the most important battle of his life at Kurushetra.

Arjuna had started giving his own reasons to not fight the war, “It’s true that I am a Kshatriya and I should not shy away from fighting but they are not my enemies they are my relatives. If I kill them I will incur sins.”

It is true that situations most of the time will not remain in our control but we can chose our responses by controlling our consciousness.  Like Arjuna a situation may arise when we may have the skill to win but may lose the will to fight the battle of life.

Arjuna came to the battlefield as a warrior but upon seeing Bhsima and Drona he started identifying himself as a grandson, as a student and as a brother.

This identity crisis made Arjuna helpless so much so that his famed weapon, Gandiva, started falling from his hand and he started quivering.

During this difficult phase of his life even a slightest mistake would have destroyed his reputation and the fate of the Pandavas during the epic battle.

Srila Visvanatha Chakravarti Thakura explains that when Arjuna was reluctant to fight the battle then Krishna, in a chastising mood, said to Arjuna, “Now you are not honoring my words, but later, because you are a great hero, your natural eagerness to fight will unavoidably manifest itself. Then, when you set out to kill Bhisma and others on your own accord, I will laugh at you.”

Although Arjuna is giving many reasons not to fight but Krishna knows that since he belongs to a warrior clan so he will ultimately fight.

So if Arjuna is anyway going to fight then why does Krishna speak the message of Bhagavad Gita to Arjuna?

It is because Krishna wanted that Arjuna fights in proper consciousness i.e. Krishna Consciousness. If Arjuna fights whimsically and is driven by modes of nature then he may commit sins and suffer. But if he fights as per the instructions of Krishna he will not just emerge victorious but he will not be subjected to any sinful reactions.

Arjuna being learned knew that in crisis it is better to seek guidance from one who is more knowledgeable, trustworthy and best well-wisher.  So without hesitation he turned towards Krishna and petitioned him, “Now I am confused about my duty and have lost all composure because of miserly weakness. In this condition I am asking You to tell me for certain what is best for me. Now I am Your disciple, and a soul surrendered unto You. Please instruct me.”

If we also make friendship with Krishna then when confronted with difficulties we will know where to go and whose shelter to take.

If we are situated in our spiritual identity as an eternal parts and parcels of Krishna then situations of this world will not bewilder us.  And Krishna like an expert captain of the ship will help us to navigate through the turbulent waves of material miseries.

The nature of this world is that sufferings will come, bewildering situations will arise. But if we purify our intelligence with message of Bhagavad Gita then we will get the strength to tolerate the provoking situations and expertly find a solution to the challenging situation.

As long as we are living in this world we have to act, none of us can remain idle and not do anything. But if we do our duties as per our own accord then we put ourselves under the jurisdiction of material laws. But if we do our duties by keeping Krishna in the centre then we will be acting for Krishna and Krishna will always guide us and protect us.

So, Gita mahatmya 1 says that Bhagavad Gita being a transcendental literature should be read carefully and if one follows its instructions wisely then he can free himself from all fears, miseries and anxieties of this world.

Why do Krishna devotees suffer? A devotee’s complain.

How Śravaṇam helps us in our Krishna Conscious journey?