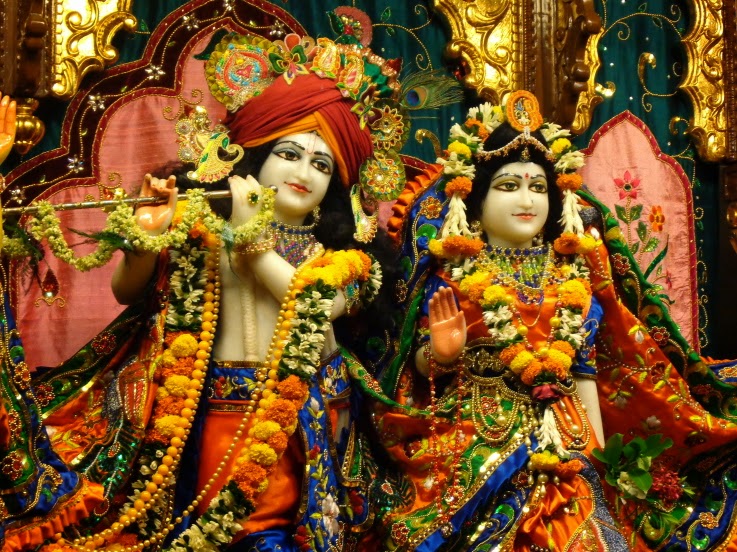 Hundreds of happy faces greeted me as I entered into the sanctum sanctorum of the Sri Sri Radha Govinda temple early in the morning. It was Janmashtami day, birthday of Lord Krishna, and the temple hall was buzzing with enthusiastic devotees – celibate monks in saffron coloured dhoti and kurta, other men in white dhoti and kurta and women in sarees, all were present.

Everyone had Vaisnava tilak on their forehead. Young, old and children all had come. Door of the altar was still closed but the celebration had already begun.

Mridangas were being beaten energetically, cymbals were being struck against each other briskly, and the lead singer was passionately singing loudly yet melodiously to the delight of all.

The entire crowd was following the tune of the lead kirtan singer. Initially the beat was slow and slowly it picked the momentum. The devotional spirit of the devotees was rising with each beat. And soon everyone got into the mood of dancing.

There were 3 types of dancers: natural, shy and reluctant. Natural dancers spontaneously came in the centre and danced. The shy dancers wanted to participate but were not ready to take the initiative, they wished that someone pulls (or push) them in the centre to dance.

Understanding this devotees invited them to dance and they happily responded. The reluctant dancers were mostly either first time visitors or not so frequent visitors to the temple. They either felt embarrassed to dance in front of a huge crowd or they just wanted to enjoy seeing the great dance for the pleasure of the Lord.

Curious kids weren’t behind. They were too trying their best to assist their parents in the celebration. Men and women danced separately. At Iskcon, as per the Vedic tradition, a healthy distance is always maintained between the two sexes.

As the conch shell blew everyone turned towards the altar whose door was still closed. Slowly the door of the altar opened, now only the large curtain remained between the devotees and the Lord. Again the conch shell was blown loudly as if informing all that Lord is now ready to receive and see all his guests. The kirtan was at its peak now and the enthusiasm was at an all-time high.

And then slowly the curtain was removed and everyone immediately fell flat on the ground to pay obeisances to the Lord. This is the Vedic etiquette of offering respect to the Lord when we see him for the first time. Some were reciting the Vedic mantras and some were saying their personal prayers to the Lord.

Everyone has their own personal and unique relationship with Krishna and he being omniscient knows the heart of all his devotees. After paying their respects all got up to see the beautiful Lord – Sri Sri Radha Govinda – to their hearts content. Standing in a tri-bend form in a huge golden colour altar with his eternal consort Srimati Radharani he looked beautiful.

When a sincere soul enquired from Srila Prabhupada that how does Krishna look like? Then this great Vaisnava saint said that go and see Krishna at Sri Sri Radha Govinda temple at 3C Albert Road, Iskcon Kolkata. Krishna looks like that. Now who would know Krishna better than his pure devotee like Srila Prabhupada? This beautiful deity of Radha and Govinda at Iskcon Kolkata has been personally installed by this great sage.

Here the ever smiling Radha and Govinda attract every individual’s heart. At times while seeing the beauty of the Lord tears flow effortlessly from the eyes of the devotees but they try their best to hide it from others.

Krishna has so many attributes that it is almost impossible to know all of them but the more we know about them the more we get attracted towards him. To enhance our understanding and our love for him three hour long Krishna katha (spiritual discourse on Lord Krishna) was organized. His various qualities and pristine pastimes were elaborately discussed. How one can come closer to Krishna and get a chance to enter his transcendental abode was also explained.  These details are there in the Vedic literatures and venerable sages have spoken a lot about it.

Since morning scores of people were thronging the temple to take a glimpse of the Lord. Delicious sweet sabudana prasad was given to all who came. The entire day was packed with cultural programs, dramas, katha, kirtan and grand abhishek (bathing ceremony). A huge waterproof pandal was erected to make sure that rain does not dampen the festive atmosphere.

Replica of forest groves of Vrindavan and Govardhan hill was recreated on the stage where abhishek had to be performed. The abhishek of Radha and Krishna was performed elaborately using milk, Ganges water, coconut water, fruit juices and colourful flowers.  Each of the ingredients was poured over the Lord one after the other and finally both of them were bathed with colourful flower petals. The expert singers kept the atmosphere surcharged by their sweet devotional songs.

A meaningful drama “God of gods” was performed by Iskcon Youth Forum members. Through drama it was established that Krishna is in fact the Supreme Personality of Godhead and all other demigods like Lord Shiva and Lord Brahma are subservient to Him.

Here at Iskcon one can find large number of youngsters from reputed educational institutions and many working professionals practicing spirituality. They did not take up devotional life because they were forced by their grandparents or parents or by society or because of some sentiments.

Everyone has taken to this path because all are logically and intellectually convinced that Krishna Consciousness can only help them to lead a meaningful life. So some have completely dedicated their life for the service of Krishna and have become celibates. Whereas many others are householders who work outside and also simultaneously practice devotion, they try to balance their life in a way so that they can sincerely execute their worldly responsibilities and can also seriously practice devotional life.

On days like Janmashtamiall devotees (celibates & householders) come together to celebrate the festival in a grand way. Their cooperation and love for Krishna is on full display on these special days.

At midnight 12, the time when Krishna had appeared in this world, a magnificent mahaarati of the Lord ensued which was accompanied by dancing kirtan. Devotees who had completely fasted broke their fast after 12 by drinking caranamrita (sacred liquid which was collected during the bathing ceremony). Special sumptuous Krishna prasad was arranged for all.

On the Janmashtami day, in Kolkata there was taxi strike and in the night there was also heavy rain but the devotees of Krishna braved all the hardships and came together in thousands to observe the appearance day/ birthday of Krishna.