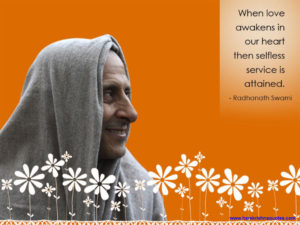 As soon as we get up early in the morning all our actions are centered around us and around those people whom we consider as our own. How best I can lead my life and what best can I provide to my dear ones is the driving factor behind any of our activities.
Some people rise above this and start thinking about the society and they are willing to extend himself or herself to serve the people. For this they are willing to endure pain too. Many say that the social activists are driven with a desire for name and fame. It is not possible to judge others’ motives and it is not required too but we can for sure try to learn what selfless service means from the story of King Rantideva.
Rantideva was a virtuous person and always tried his best to please the Supreme Lord. Once after fasting for forty eight days he was given foodstuff made with milk and ghee and some water.
But as he was about to eat, a brahmana guest arrived. Rantideva immediately offered a share of the food to the brahmana.
After that he divided the remaining food among his relatives. But again as soon as he was ready to eat, a sudra arrived and King Rantideva without any hesitation gave him also a share of the food.
Again as he was about to eat, a man came with dogs and said that he and his dogs are very hungry. Rantideva immediately offered them the remaining food.
Now only water was remaining for him but as he was about to take water, a candala appeared and asked for drinking water.
The king was shivering for want of water and food, if he would give water then his death would be for sure. But the king’s heart melted seeing the pitiable condition of his guest and he gave him water too.
While giving the water the king said, “I want only to stay among all the living entities and suffer all distresses on their behalf, so that they may be freed from suffering. By offering my water to maintain the life of this poor caṇḍāla, who is struggling to live, I have been freed from all hunger, thirst, fatigue, trembling of the body, moroseness, distress, lamentation and illusion.” SB 9.21.12 – 13.
The demigods Lord Shiva and Lord Brahma were so pleased seeing the sacrifice of the king. In fact it was they who had come in the form of brahamana, sudra, candala etc to test the king’s resolve to serve the people. They manifested their identities before the king and blessed the king and sang his virtues.
The king was able to exhibit such a selfless attitude and kind heartedness only because he saw every individual as parts and parcel of the Supreme Lord. When we love God we love all, we serve all.
Please follow and like us:

Rising above the mode of goodness

Should we forgive those who have hurt us?