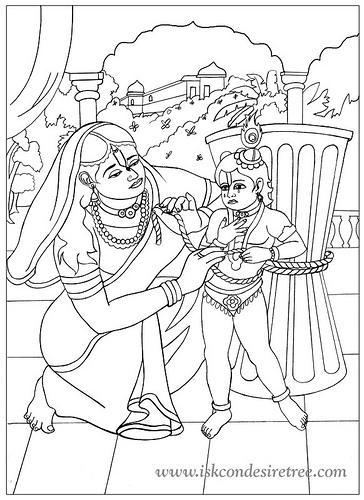 “What best should I do for my Krishna today?” Mother Yashoda always contemplated on this most important topic. Like a responsible mother she wanted to give best to her child. For example, Nanda Maharaj had 9 lakh cows but Yashoda had specially chosen few cows among those 9 lakhs cows whose milk was used to prepare various items for Krishna.  These fortunate cows were given flavoured grass and their milk too carried the flavour.

One day when her little Krishna was deep asleep and other ladies in the house were occupied in different activities she immediately decided to prepare butter and yogurt which Krishna liked a lot. She used to get many complains from the gopis in Vrindavan that Krishna steals butter from their house. It disturbed her a lot.

Meanwhile other gopis in Vrindavan were also preparing butter and were desperately waiting for Krishna to come and steal butter from their houses. “What if Krishna does not come today?”  The mere thought disturbed them too much. “And what if Krishna comes and there is no butter?” The thought made them anxious and they hurriedly began churning the milk.

But mother Yashoda had a different plan today and she was determined to implement it.  Putting aside all her work she began to churn the milk of the best of the cows. She was confident that her plan would succeed.  While churning she started remembering Krishna, thinking about Krishna’s pastimes she began smiling and singing.

Everyday she used to compose many songs based on many pastimes of Krishna in the land of vraja. She was the lyricist, music director and singer. This was one of the best ways to be absorbed in Krishna for her when Krishna was away playing or was occupied somewhere else.

When she sang her bangles, earrings and ankle bells moved rhythmically, the churning rod too made melodious sound. Dressed in yellow sari she was joyfully singing giving pleasure to everyone.

Meanwhile the Supreme Lord who was sleeping in the other room immediately got up. As Yashoda cannot be separated from Krishna similarly Krishna cannot live without Yashoda.

Krishna got up from the bed and ran towards her mother and embraced her.  He held the churning rod and demanded his mother’s complete attention. “I am hungry I need milk” was his demand. The words of little Krishna filled Yashoda’s heart with love.

She immediately left churning the milk, took him on her lap and began feeding him her milk. Krishna was satisfied, mother Yashoda was so pleased.

But someone in the corner of the house was devastated. There was a pot of milk which was put on the fire for boiling. The milk was so excited thinking that Krishna will drink it. The milk was waiting desperately for that momentous moment when it will get an opportunity to serve Krishna.

But seeing that Krishna has already begun drinking the milk of his mother it felt so sad.  The milk thought, “The purpose of life is to serve Krishna but since I cannot serve Krishna now, so let me commit suicide. Let me jump out of the pot and burn myself in the fire.”

The milk started overflowing which caught Yashoda’s attention. She had no other choice but to attend the milk. Reluctantly she put Krishna aside and ran to save the life of the milk.

And this angered Krishna. “How dare my mother leave me like this. Am I not enough valued in the house?” He was a pampered child and always wanted undivided attention of Yashoda.

I need to teach my mother a lesson. He was extremely angry. Feeling neglected his eyes were filled with tears, in anger he bit his red lips with his teeth. He could not hold himself any longer. He picked up a stone and broke the container of yogurt. As soon as the pot broke, he ran away from there.

He went to the other room. He climbed on the grinding motor which was upside down. Nearby was a pot filled with butter. He began eating butter and began feeding butter to the monkeys and the monkeys were enjoying the feast.  He was also constantly looking towards the door whether Yashoda is coming or not.

Meanwhile as soon as mother Yashoda came to attend the overflowing milk, the milk felt ashamed at its own action, “What have I done. Yashoda was so nicely serving my sweet Lord and my Lord was so happy. I interrupted the loving exchange between the supreme Lord and his supreme devotee.  I am an offender.” Thinking this it stopped overflowing.

Meanwhile Yashoda hurried back to see Krishna. But Krishna was not there. There was a broken pot and a piece of stone and yogurt everywhere. She understood what has happened. “Krishna has become too mischievous. He needs to be corrected.” She thought.

The butter smeared little footprints gave her the direction. And as soon as the monkeys sensed that Yashoda is about to enter the room they ran away from there. Sensing trouble the crows too ran away from the house.  And now Krishna was all alone.

“My friends are so ungrateful,” he thought.  But he did not have much time. He jumped from the grinding mortar and ran away from there. Yashoda was in no mood to leave Krishna. She followed him.  She even picked up a stick. Seeing stick and the grit of Yashoda Krishna was so fearful.

He ran with all his might.  All the maidservants left their household work and came to see what was happening.  No one tried to stop Yashoda or catch Krishna. They did not want to align themselves either with Krishna or Yashoda, they were neutral.

The news spreads in Vrindavan

Meanwhile in entire Vrindavan the message had gone that Krishna is being punished by Yashoda. Whoever heard this left all their work – urgent or not urgent did not matter – and came to the house of Nanda Maharaj to see what is happening.

Krishna’s little friends wanted to help Krishna but were helpless. The elderly gopis were confused – whether to take side of Krishna or of Yashoda. Yashoda is their friend and Krishna is so dear to them. But later they thought that Yashoda is his mother and a mother knows what is best for her child. But Krishna is in difficulty, so they also wanted to help him.  But none of them took any action, they just stood to enjoy the fun.

Will Yashoda be able to catch Krishna? And if caught what punishment is he going to get? Everyone had this question in their mind.

Meanwhile Yashoda was putting in her best efforts to catch Krishna.  While she was running her hair loosened and the malati flowers from her hair started falling.  Yashoda was getting tired and Krishna felt the pain of his mother and so he finally agreed to be caught by her.

Srila Prabhupada explains, “Yogis, mystics, want to catch Krishna as Paramatma, and with great austerities and penances they try to approach Him, yet they cannot. Here we see, however, that Krishna is going to be caught by Yashoda and is running away in fear. This illustrates the difference between the bhakta and the yogi. Yogis cannot reach Kṛishna, but for pure devotees like mother Yashoda, Kṛishna is already caught.”

But when Krishna saw the stick in her mother’s hand, his eyes got filled with tears of fear. Yashoda did not want to frighten her child but wanted to correct him. Like all the parents she wanted her child to be disciplined, obedient and of impeccable character.

Yashoda thought, “Now is the right time to make him understand about the righteous and unrighteous behaviour. Let me tie him up. He will at least understand that if he commits any mistake he will be punished and so in future he won’t be mischievous. She also thought since he is in fear so he may run away from the house but if bound by rope he won’t flee.”

She threw the stick and took a rope to tie Krishna.

She brought another rope and tied it to the original rope. Again it was short by exactly two fingers. She instructed the maidservants to bring more rope and they all immediately collected all the ropes in the house and tied with each other.

Meanwhile all the vrajvasis who were enjoying everything began laughing at the plight of mother Yashoda. Mother Yashoda was increasing the length of the rope but was unable to tie little waist of Krishna.

Whenever she tried the rope was short by two fingers. Yashoda was confused but refused to give it up.  She was getting tired too. Many gopis sympathised with Yashoda. They too ran to their houses to bring the ropes. In fact almost all the available ropes of vraja was used now but Krishna was still not bound. Yashoda was extremely tired. She was sweating and breathing heavily.

Krishna could not see his mother in this condition, his heart melted. Her devotion won Krishna’s heart.  And so he finally agreed to be bound by the ropes.

Krishna is the Supreme Lord. He is creator, maintainer and destroyer of the entire universe. He is the source of everything.  No one can ever conquer him. But that Supreme Lord is conquered by mother Yashoda by her pure love.

Sukhdev Goswami says in Srimad Bhagavatam 10.9.20, “Neither Lord Brahma, nor Lord Siva, nor even the goddess of fortune, who is always the better half of the Supreme Lord, can obtain from the Supreme Personality of Godhead, the deliverer from this material world, such mercy as received by mother Yashoda.”

While being tied to the mortar, Krishna also delivered the sons of Kuvera – Nalakuvara and Maṇigriva – who were cursed to become trees by the sage Narada.

“Those superexcellent pastimes of Lord Krishna’s babyhood drowned the inhabitants of Gokula in pools of ecstasy. To the devotees who are attracted only to His majestic aspect of Narayana in Vaikuntha, the Lord herein reveals: “I am conquered and overwhelmed by pure loving devotion.” To the Supreme Lord, Damodara, my obeisances hundreds and hundreds of times.”

Krishna got the name Damodar

The form of little Krishna tied by a cow rope to a wooden grinding mortar is called “Damodar”. “Dam” means rope and udar means belly. So “Damodar” means one who has a rope around his belly.

This Damodar pastime occurred on the day of Diwali.

11 reasons why Kartik month is the holiest month

5 most important spiritual activities to perform during Kartik month

When was the first Rath Yatra festival celebrated?

There is no glory in killing cows and eating her