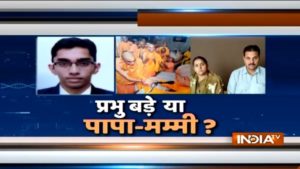 India TV recently had a program “Iskcon Sannyasi” (https://www.indiatvnews.com/video/india-tv-exclusive/watch-special-show-on-iskcon-sannyasi-465686) in which they invited a Iskcon brahmachari and his parents  who were against his son joining the temple as a monk. First the program title, Iskcon Sannyasi, was incorrect, the devotee had become a monk and not sannyasi. This showed that India TV had not done their homework properly and they did not know the difference between a sannyasi and a celibate monk.

Nevertheless the program gave chance to the parents and his son, now a monk, to present their viewpoints.

It is natural for the parents to become very disturbed when they find their son has given up everything, has left home to become a monk in the temple.

For most of the people it may appear as an irrational decision but those who are the students of Gita and Vedic literature would not be surprised to find someone dedicating his life completely to serve the Supreme Lord, Krishna. Majority of the people in this world are interested in gratifying their senses, are busy pursuing their material goals. This is why Krishna in Gita says, “After many births and deaths, he who is actually in knowledge surrenders unto Me, knowing Me to be the cause of all causes and all that is. Such a great soul is very rare.” Bhagavad Gita 7.19. 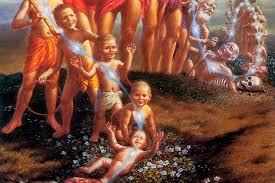 The mother was inconsolable, for most part of the program she kept weeping and pleading his son to return back home.  Father was in control of his emotions but he was angry that his son has become a monk.

Both the father and mother levelled many non-verifiable allegations against Iskcon such as – Iskcon has brainwashed their child, they forcibly took away their 28 year old son, they taught their son to speak lies, Iskcon devotees did not treat them nicely and so on.  Having spent more than a decade in Krishna Consciousness movement I am not surprised to see the reaction of the parents.

For most devotees who become a monk they rarely get the approval of their parents and their family members.

It is true that to practice devotional life one does not have to become a monk. One can become a grihasta – get married, have children, stay at home and work in the outside world. However different devotees have different nature and based on that they choose their ashram i.e. if they want to become a grihasta or a brahmachari.  As far as I know, I have never seen any devotee being forced to choose a particular ashram.  Also it is equally true that there is a tug of war in devotees’ mind during the initial years regarding choosing between being a monk or getting married. 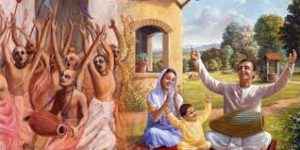 My parents also had great fear that I may join the temple and not get married. But eventually I decided to get married and practice my devotional life. But I have great respect for the devotees who decide to just serve Krishna and so join temple as a celibate monk. Not getting married and staying in the temple gives one an opportunity to focus most of their time and energy in serving the Lord and sharing the message of the Lord.

But one may ask what about their responsibility towards their parents and family members? 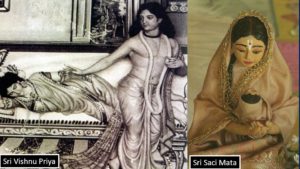 When media or common people are raising objections on devotees becoming a monk they fail to understand that the celibate monks are not relinquishing their responsibility towards their parents but while serving their parents they have chosen a life for a higher cause. Parents should feel proud about their children.

In the present world there are many sons who are earning lakhs of rupees in multinational companies but have no love and respect for their parents. Their parents are forced to stay at old age homes. Their was an incident of an elderly lady whose son was in USA and she was staying all alone in India. When she died no one was around her, in fact no one knew that she is dead. When her son came from USA after several months and broke open the door he found his mother’s skeleton (https://www.indiatoday.in/india/maharashtra/story/rituraj-sahni-asha-sahni-us-returned-nri-old-age-home-1029606-2017-08-14).  Although her son was earning in dollars was comfortably settled in his life but had no place for his mother.

However there are many instances wherein Iskcon monks have gone extra miles to serve their parents. One example is of Sankirtan Anand Das and Sundervar Das, both are brothers and are monk in Iskcon temples. When their mother and father became sick then both the brothers served their parents for several months and both the mother and later (after many years) the father left their body in the presence of their sons. They never gave up their service towards their parents.

While India TV is trying to portray that the son has done injustice to their parents by becoming a monk but if one thinks rationally one would find that the son has not left the parents. Indian Prime Minister, Narendra Modi, does not stay with his mother but it does not mean that he has left his mother. For serving a higher purpose some sacrifice has to be made and this what the monks are doing.

India TV would do a great service to the society if they start showing the plight of the parents who have been abandoned by their wealthy sons and are suffering in old age homes.

What does it mean to live in Vrindavan?

How to attain freedom from never ending suffering?

Kill the Ravana within before it kills us