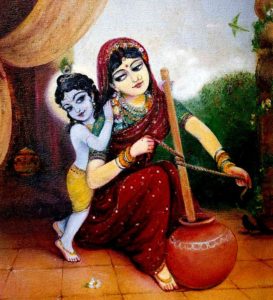 Krishna was hungry. He wanted milk and so he went to his mother. Mother Yasoda was churning butter at that time.
When she saw Krishna, she immediately understood that he was hungry and so she started feeding him. Meanwhile a pot of milk which was getting boiled on the oven started overflowing.
Mother Yasoda kept Krishna aside and rushed to attend the boiling milk on the oven. Seeing that Mother Yasoda had stopped feeding him the milk, Krishna became angry. He hit the pot of churning butter with a stone, broke it, and entered another room.
When Yasoda saw that the pot was broken she immediately understood that it’s the mischief of Krishna. In the room Krishna was standing on a mortar which he had put upside down.
He was stealing butter and was also feeding it to the monkeys. When he saw his mother, he became afraid and started running away. Mother Yasoda became angry, she thought to punish Krishna.
She caught Krishna and decided to bind him with a rope.
However, when she tried to put knot on the rope she found it short by 2 fingers. She took more ropes and tied the ropes together. But when she tried to put the knot it was again short by 2 fingers. She did it again and again but each time the rope was short by 2 fingers.
She became tired, she started perspiring. Krishna saw her mother and felt great love for her. He could not bear her pain. So, he decided to get bound by her ropes.
Saints and sages meditate for millions of years yearning for a glimpse of the lord. But here mother Yasoda was so fortunate that she was constantly relishing the pastimes of the Lord and even was punishing Him. This is why Krishna is called Bhakta Vatsala.
We too can get an opportunity to associate with Krishna. The only qualification required is our eagerness & our desire to associate with him. Krishna confirms, “As all surrender unto Me, I reward them accordingly” Bhagavad – Gita 4.11.
Let us also try to bind Krishna with the ropes of love.
Related articles:
Tags: Damodara lila, Krishna, Mother Yasoda, rope

5 most important spiritual activities to perform during Kartik month

Amazing facts about the massive chariots of Jagannath, Baladeva & Subhadra