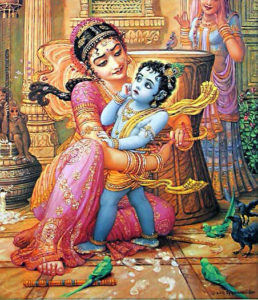 Neither Krishna likes to be worshiped as God and nor his pure devotees want to worship him as the Supreme Lord.
Krishna prefers an informal relationship with his very close devotees as friend, as son and as a paramour.  He enjoys joking, laughing, playing and eating with his friends at the bank of Yamuna. He rejoices teasing and dancing with the girls of Gokula. And at home he is a naughty little child of Mother Yashoda and Nanda Maharaj.
In Vrindavan Krishna is the centre of attraction of all, he is their life and soul, Vrajbasis (residents of Vrindavan) just want to do what pleases Krishna and Krishna reciprocates with them.
When Krishna is in front of them they relish each and every activity of him and when he is not in front of their eyes then they remember, sing and discuss Krishna’s various heart touching pastimes.
Krishna’s mother Yashoda is always trying her best to give her best to Krishna. She makes sure that his son is fed properly, is dressed properly and is protected from all dangers and difficulties.
Once when she was churning butter at her house Krishna became hungry and she immediately stopped what she was doing and took Krishna on her lap and started feeding him her milk.
Krishna is the supreme Lord; he satisfies each and everyone’s hunger and thirst but here Yashoda was feeding her hungry baby.
Meanwhile a pot of milk was boiling on the oven and when the milk saw that she has not got an opportunity to serve Krishna then milk became upset and started frothing with anger and started spilling. In the spiritual world milk is also a living being.
In Krishna’s abode everything is conscious and all is always eager to serve Krishna.
Yashoda was forced to leave Krishna to attend the boiling milk. And this angered Krishna. “How can my mother leave me and go to do something else? She should always give me priority over any other activity?”
And in anger he broke a butter pot. Then fearing that he may be punished for this he ran away from there. Yashoda wanted to correct her naughty child, so she took a stick to punish Krishna.
As soon as Krishna saw a stick in his mother’s hand, he ran out of fear. Yashoda ran behind him but was not able to catch him. Krishna ran all over the house and Yashoda ran behind him and after lot of struggle she was able to catch him.
Yashoda saw fear and tears in the eyes of Krishna and her heart melted. To allay Krishna’s fear she dropped her stick and thought to bind Krishna to a wooden grinding mortar, a milder form of punishment.
She took a rope and tried to tie Krishna but the rope was 2 inches shorter. So she added another rope to the existing one and that rope was again 2 inches short. In fact she took the entire rope which she could gather from the house but each time the rope was exactly 2 inches short. She was surprised and shocked. She was trying her best to bind Krishna the Supreme God with rope.
The scriptures inform us that Krishna is the source of all cosmic manifestation. There are millions of universes and all is within the body of the Supreme Lord.
Can anyone bind a universe with a rope? It’s impossible. If that be so then how can anyone bind the Supreme Creator under whom there are millions and zillions of universes? It’s unthinkable.
Seeing Krishna’s universal form Arjuna had said,
Yashoda had become too tired, she was profusely perspiring.  Krishna saw the anxious and tired face of his dear mother. He saw her pure, unmotivated, unconditional and selfless love and decided not to bother her much. And so he willingly agreed to be bound by her mother.
He then began to be called as Damodara, “one whose udara (belly) is bound by dama (ropes).”
This pastime reflects the extraordinary glory of the devotee.  Yogis and mystics perform great austerities for years to just get a glimpse of Krishna yet they hardly succeed. Jnanis try to understand Krishna through their knowledge but are not able to fathom his glories.
But Krishna without any qualms becomes a puppet in the hands of his devotees, he enjoys such amorous relationship.
This wonderful pastime took place in the month of Kartik and during this month devotees sing Damodarashtakam and offer ghee lamp to the Lord.
While worshiping Lord Damodar we should pray  –
Please follow and like us:

Why Chandan Yatra is celebrated?

Damodar Lila: Why Balaram could not untie Krishna